On the outskirts of Brussels, set within a beautiful lush green wooded area surrounded by what appears to be student accommodation, sits the ultra modern home of the Musée Hergé. In July we embarked upon our first holiday abroad in what seems like a lifetime, beginning with a short drive down to North Shields to catch the ferry. When appraising the route down to our holiday home, I realised that either way we go, we need to travel through Belgium (obvs) and as such, if we took a wee turn here and went around this way, we could go via the Hergé museum; a place I’ve wanted to visit for a long time.

I may have wanted to visit this place for a long time, but I’ve been a massive fan of Hergé’s since I was around 12 years old, when I would travel most weekends to the local Library and borrow each hard back volume, and read it cover to cover as many times as possible before returning the next weekend to do the same. As I grew up, the reading of his books morphed in to watching “Hergé’s – The Adventures of Tintin” that broadcast on Channel 4 each Thursday afternoon after school; to this day the theme song still takes me back. Mum always thought the guy at the start announced “Thursday’s Adventures of Tintin” and only recently realised her faux-pas. The older I became, the more I looked back nostalgically at Tintin and the stories I really loved, and only recently decided to revisit the world of Hergé and his masterpieces.

So it was to be then, as we set off from the Ferry at 8am, that we would weave our way down Belgium, around Brussels, arriving in Louvain-la-Neuve at 11am, have a bite to eat and then absorb all that the museum had to offer. In reality, by the time we got away from the terminal and down through traffic, we arrived later than planned with the farce of finding a suitable parking place for the convoy (we were travelling in convoy) and getting in to the place. We all knew going in that I was the only one interested, so once we had fumbled through lunch (a delicious burger that was cold…) everyone else whizzed around and out. It left me skipping along at a faster lick, as I knew we had a long way to go still on our outward journey. It didn’t help either that our wee girl was the least interested in Hergé, and was most interested in the multi-coloured down-lights under every exhibition, which made it a bit more stressful anyway. I feel like I didn’t really get a chance to properly absorb myself in Hergé’s world but I thankfully managed to take enough away with me that I felt happy that I’d went. 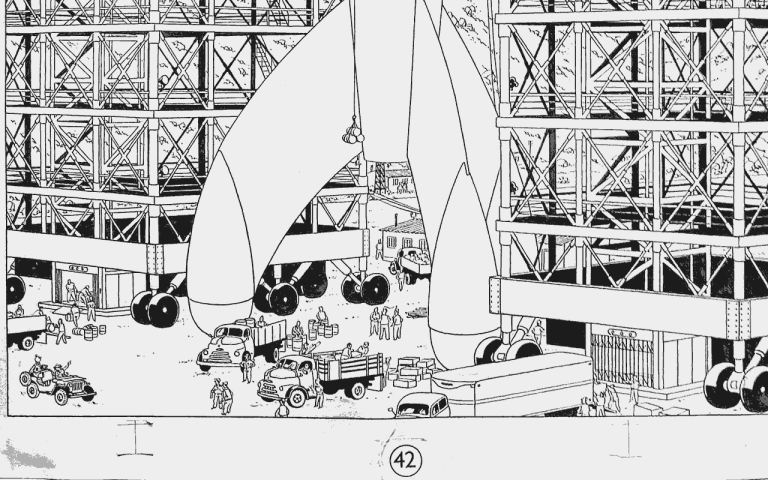 For one I realised, in what was a pretty massive moment for me, that Hergé wasn’t actually the ink master that I had once imagined. Not that he wasn’t a masterof course, but before seeing his original inked proofs I imagined Hergé to be the ultimate pensman, laying down effortless smooth lines of ink in his instantly recognisable “Ligne claire” style. One line to the next, flowing and crafting; assembling each cell of each page of each book; thoughtful and precise. Instead what I realised when I saw some of his originals was that he is as fallible as the rest of us, in particular when it comes to mistakes. Again that’s not to say in any shape or form that Hergé is not very good; the absolute opposite is true. It’s just that he rethought and edited his work, and did it with tip-ex and paper patches! There’s some original frames which are flawless, like the scene above with the rocket on the launchpad; some tiny little edits here and there, but on the whole, a giant, complex masterpiece of inking. But in other frames, the editing is really quite heavy!

I guess I shouldn’t be surprised at all. He was an artist at the peak of his game and certainly an artist isn’t concerned with making mistakes. The biggest “wow” point for me was seeing his original of the “Explorers on the Moon” scene, where the rocket is landing on the moon. You can see that he originally placed the rocket right up in the reader’s face; that wonderful signature use of perspective and speed-lines bringing an excitement to what would have otherwise been a pretty bland frame. I would have been happy with it anyway. Instead, he’s removed the rocket from the fore-front, and moved the rocket to a distance. As I stood there marvelling at this one piece of paper, I wondered why he did that? Was the rocket just too close? Or perhaps he wanted to isolate the rocket on black, instead of being mixed up amongst the Moon surface? Or, in what I hope is the case, he wanted to add bleakness; isolation even. By making the rocket a lot smaller and further away from us, the reader, he is bringing a sense of proportion and scale to the scene that really captures the desolate and cold surface of the Moon, and with it the infinite blackness of space. There’s a speech bubble above the rocket in this original, which hasn’t been filled yet; in the final artwork it has “Moon-Rocket to Earth…Tintin calling…We are beginning to feel the effects of slackening speed…” in here, which I guess edges up feeling of risk.

Still, in that moment as I stood there feeling really quite happy that even Hergé uses such rudimentary editing techniques, I definitely felt a connection of loneliness and fear within this frame, just because he shifted that rocket further away. The genius of Hergé.

There were lots of little nick-nacks and artifacts around the museum and they even had Hergé’s desk in there. It was a really lovely place and I only wish I had more time to spend in it. Perhaps one day I can go back, but afterwards I really felt like my love for Hergé’s work and the Tintin world was rekindled. A few days after our visit whilst enjoying the downtime, I went on to the web to see if there was any nice books about Hergé and lo-and-behold there are a few “official” ones. The first was really exciting, because it’s the companion book to The Musée Hergé called “TINTIN – The Art of Hergé” and within it is most, if not all of the stuff I had seen in the Museum! So that was ordered, if only to give me the time to absorb what I should have whilst I was there, but only now I could inject my own experience of the museum whilst reading it.

The second was a celebration book from when Hergé’s work was exhibited at the Center Pompidou in Paris in 2006. It’s a wee bit smaller but a lot thicker and contains a lot of what is in the Museum book, but is captioned in French which makes it a bit more challenging, having to translate it all. Nice object to have though! 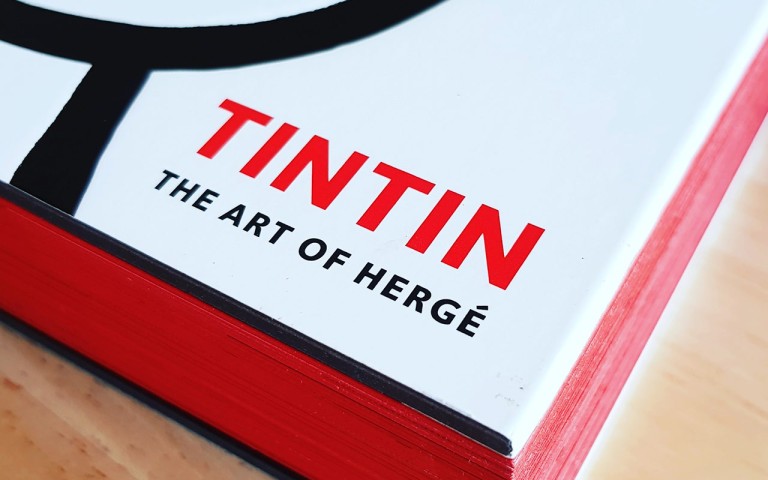 A few weeks ago it was my 20th birthday again, so Mrs. decided to continue being the wonder that she is, and gifted me the complete Hergé collection. I’m working through it from start to finish and already it’s really fascinating to watch Hergé develop in skill, both visually and in storytelling. There’s some really funny sections in the earlier books, especially “Tintin in the Land of the Soviets” which has some of the most wonderfully obscure exposition. 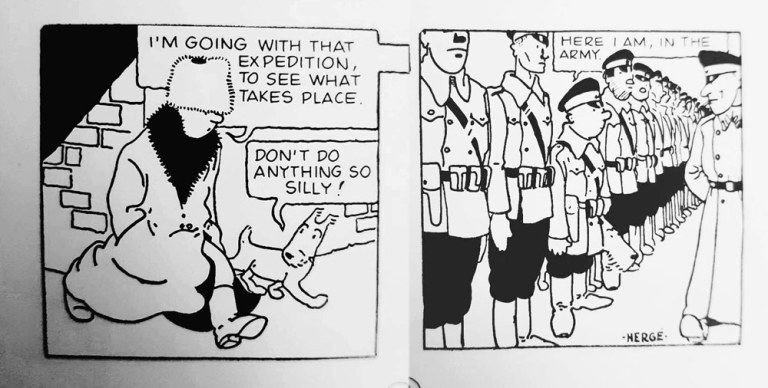 Hergé was a master of his art and his legacy remains as exciting as it ever was for me. Maybe my wee girl will arrive at a point where she too can discover Tintin…or not!